Latest update: 2021-10-01
More videos added on our channel, have a look by clicking here… And we noticed many people asking the same questions over and over on Facebook. So we decided to put answers to those questions at the top of our page as Quick Info. Hopefully this helps.

I caught my very first fish here by accident while I was practising casting my fly-fishing rod. Out of nowhere a nice sized bass took my woolly bugger and just like that the bass and I was hooked. He was hooked for about 3 minutes, but I’ve been hooked ever since. 5 years later and Rietvlei Dam still and will always have a special place in my heart.

Since that day we’ve probably visited Rietvlei close to 250 times. It’s so close to us that we got ourselves season passes, and during early spring (spawn) we try to go 3 or 4 times a week. It’s a wonderful place, a hidden gem, and very rewarding if you know what to do.

On this page we’ll share (and continually update) our accumulated knowledge of Rietvlei Dam, our second happy place.

Rietvlei Dam has a deserved reputation for being very tough. Especially for carp. We’ve blanked many many times but even though this was frustrating at times it turned out being a blessing in disguise. It made much better anglers of us by forcing us to try all kinds of different strategies. Here’s what we’ve learnt so far.

Bass fishing at Rietvlei Dam can be mind-blowing one day and dead the next. No-one can tell us why. We looked at the weather conditions, water temp, air pressure, full moon etc., nothing has explained this to us. We just take a chance each time, drive out there and hope for the best. But we are rewarded more often than not. Here’s a couple of bass caught over the years. 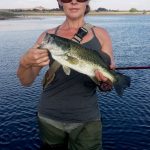 Not the biggest bass, but still happy to catch something 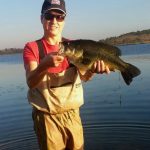 A nice bass for Martin 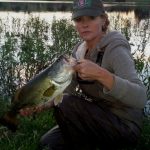 Another nice bass in the cold 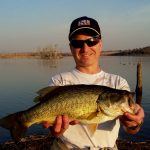 Yet another nice bass 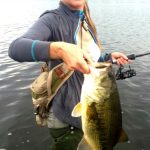 Yet another nice size bass 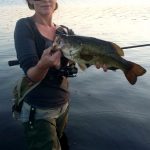 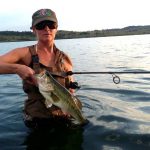 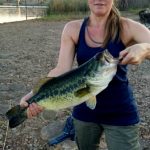 Another monster at Rietvlei dam 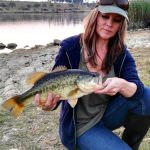 Second bass of the season at Rietvlei Dam 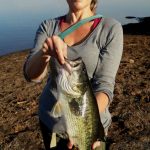 Fishing for bass in the spring 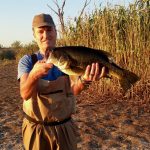 Another nice big bass for Martin 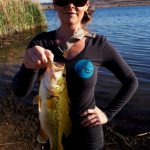 Another decent bass at Rietvlei Dam 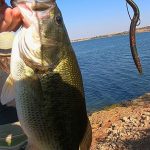 Another nice bass for Martin, caught on his favourite lure 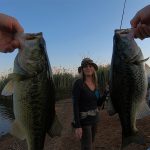 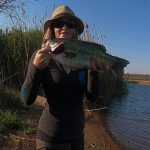 We had a really good weekend at Rietvlei Dam, and caught some nice bass

My previous pb (and Martin’s current pb) were both caught at Rietvlei in the last couple of years. Here’s my 3.2kg I caught way back in 2015.

As always every single fish was safely and quickly released.

As stated before we’ve used almost everything at Rietvlei Dam with mixed results. Starting from the most successful, here’s a list of our favourite lures to use:

We always fish very very slowly at Rietvlei. Cast your fluke or worm out there, let it drop, wait for it to settle and then slowly retrieve, twitching it every now and then. We’ve caught probably 90% of our fish this way and it’s actually super exciting. Seeing your line suddenly rise violently is exhilarating.
For cranks obviously make sure they hit the bottom rocks, and for jerkbaits a faster retrieval seems to work.

Hippo warning! – We have been met by hippos over the years that come around the corner from the end of the fishing area. They graze among the grass every year during spring and have become more and more frequent.So just be vigilant when wading, there hasn’t been any serious incidents but as we all know they are grumpy animals…

It’s a well-known fact that carp fishing at Rietvlei Dam is extremely tough. No-one can dispute that. At the same time it is a favourite among specimen anglers because if you do manage to hook a carp there is a very good chance it’s going to be your new pb. The carp at Rietvlei are massive and if you have the equipment (and patience) you will be rewarded handsomely.

Because of this we very seldom target carp there. On the few occasions, we did try we managed 2 in total, but we were fishing conventionally (papgooi) and Martin struggles to cast further than 100m 🙂 Nevertheless here is one of the catches, a nice 5kg Rietvlei “baby”.

We mainly target bass and carp at Rietvlei Dam but here are some other species that may or may not be available.

There are some monster barbel in Rietvlei. We always see them playing, especially on the chalets side where there are many rocky areas. We tried for barbel once using crab and when the rod eventually ran we had no chance stopping it. It simply broke the line when we attempted to stop the run. Earthworms, platannas will always get you a few bites. And crab, which can sometimes be caught along the shoreline, is another barbel favourite. Friends tried the popping method once with zero success.

There are kurper in Rietvlei and we know people catch them using earthworms. But we’ve never seen any, not one, ever. If anyone reading this can give us some advice on how to target them that would be really helpful. But we can’t confirm that they are out there.

Because we’ve never seen one at Rietvlei we really doubted that they still exist there. But recently there’s been quite a few caught by carp anglers. So they are still very much active in the dam and we’ll be targeting them the next chance we get. As evidence here’s Rikus van Vuuren showing off his 3.7kg yellowfish he caught a while ago. It was caught on a hasbeen tigernut of all things. Nice catch Rikus!

There is a large stretch of shoreline available for camping at Rietvlei Dam. As you drive in by the gate you turn left immediately, drive around the bend and you’ll see the first ablution block. From there to the end of the road is the camping fishing area.
The area around the first ablution block is called the “sloep” and where the road ends is the island spot. You camp literally 50m or less from the reserve fence which means you often see some of the animals (including rhino!), and at night you hear them…

Have a look at our Rietvlei Dam map below to see where all these spots are etc.

The chalets are perfectly located and quite comfortable. There is a large ideal fishing area in front of them with some really deep waters. They were out of commission for a while but there are quite a few available again.

We’ve stayed there since they re-opened and it was great. We caught many large bass and the carp fishing was pretty good too. Check out the video below for more detail. 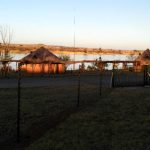 Chalets at Rietvlei Dam newly fenced off with proper gates 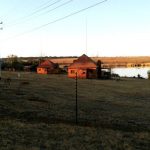 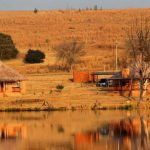 View of Rietvlei Dam chalets from the camping area 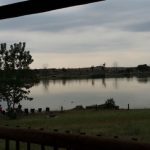 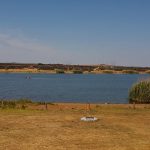 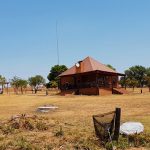 Rietvlei Dam view of our chalet from the water's edge 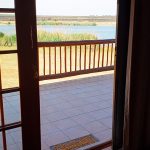 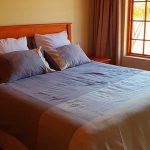 Bedroom in the chalets 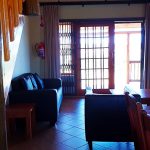 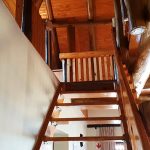 Stairs to the loft 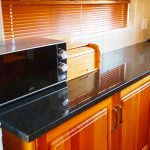 Kitchen in the chalet 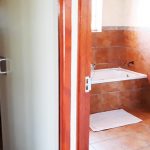 Bathroom in the chalet

These units go for R900 / night and you can book these chalets by sending an email to rietvlei-angling@tshwane.gov.za. The rest might be opening in due time, we’ll update this page as we find out more.

Touch wood but there has been zero incidents for at least 4 years at either the camping or chalet side. So it’s one of the safer places you can go. At this point the only real threat are the hippos 🙂

That’s how we understand it anyway…

Our first session in 2021 was better than expected.

Here’s a quick video of some pre-spawn bass fishing.

Here’s a quick video of our experience staying at the chalets in October 2019.